skip to main | skip to sidebar

I ran over something with my car and just figured it was just a rock, so I kept on driving. A few minutes later, a man drove next to me with sheer terror on his face. He was very frantic and was motioning me to pull over. I almost ignored him because he was acting all wacko, but I put two and two together and realized that there was something wrong with my car. I am so glad I pulled over because my gas tank had been pierced by a metal bedframe piece. Gas was gushing out of my tank. The metal pole was dangerously close to dragging on the ground and it could've created a spark and my car could have blown up with me and Connor in it! WHEW!!!! What a close call! My important lesson learned was:

Always stop after running over anything with your car and make sure the gas tank isn't leaking!
at 6:04 AM 1 comment:

In times of stress, STAMP it out! 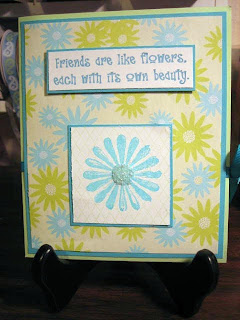 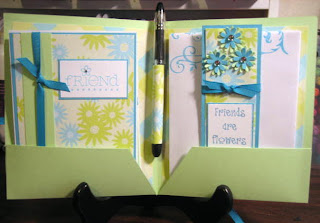 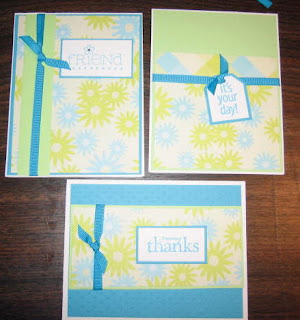 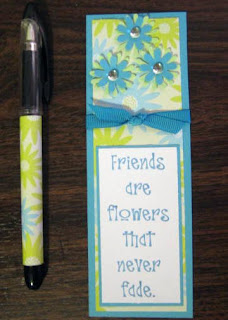 After my scary, freak-accident the other day, I have been very stressed out. I think it's because I recently had my car totalled by a kid with just a learning permit and because I had to stay very calm in front of my son so that I wouldn't freak him out. I just finally couldn't hold it in anymore and I needed to let the stress out. After a big cry, I got to work making some stationery folio sets. They each come with 3 matching cards, decorated envelopes, a bookmark, and a pen. I feel better now!
at 5:57 AM 2 comments: 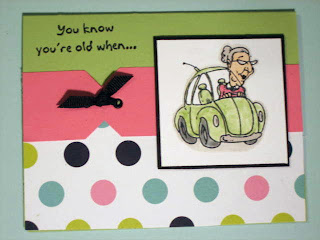 I made this card for my mom's 69th birthday. The inside reads, "getting lucky means you found your car in the parking lot." My mom has a great sense of humor and is NOTHING like the granny on the card. She is so much fun and is very active. I got this set when I was in Wisconsin last month visiting my sister-in-law, Juli. I got so excited when I found out that Juli lives just a couple of miles from the Gina K store. I went to the store and bought lots of goodies. Unfortunately, I didn't get to meet Gina. She was out of town while I was there.

I am so glad the Olympics are over. I can now go back to a normal sleeping schedule. For the past two weeks, I have been staying up until 3 a.m. watching the LIVE coverage. Why can't I just be a normal person and watch it at a normal hour when it's taped? The funny thing is that I don't even like to watch sports on t.v.! The only time I watch sports is during the Olympics and The Tour de France. So now I can get back to creating and stamping!
at 4:14 PM No comments:

I started this blog at the urging of my BFF, Rae Anne. Like I need one more thing to get addicted to! I have been admiring so many stamping blogs and have finally taken the plunge (better late, than never). Now let the blogging begin!
at 12:40 PM 7 comments:

Brenda
Stamping is what I do to keep my sanity and remedy my creative itch. I thought it would be cheaper than going to a therapist, but much to my husband's chagrin, I was wrong!

Blogs That I Dig

All content, including text, photographs, and concept design works, are © Sassybee Designs/Brenda Speck. You may use designs for personal/non-commercial and inspiration use only.